I see I’m not the only one that will never understand why people expect so little out of life.

While perusing Twitter this beautiful afternoon here in Chicago…

I came across a string of tweets from Blogger and New York Times Best Selling author, Ramit Sethi from iwillteachyoutoberich.com

He is one of the top bloggers that I’ve followed for quite sometime and I can always bet the house on him to stir the proverbial twitter pot.

As his domain name suggests, teaching people to want “more” is his calling. A program I’m definitely down with, but not everyone feels that way.

I ran across a series of tweets from him that caught my attention where an active debate of the “have’s” vs. the “have not’s” was taking place so I decided to insert myself into the debate.

Well, for no other apparent reason but to participate in the pot stirring by Mr. Sethi.

Summer is over, so why not?

So anyhow, the comment in question was from someone on Twitter in response to a blog post he penned titled, “The hidden hypocrisy of wanting “more“, of which I highly recommend you read.

He makes a very strong argument for wanting the $200 latte from Starbucks vs. the 7 Eleven stuff.

Nothing against 7 Eleven by the way, but…

THIS is what I saw: 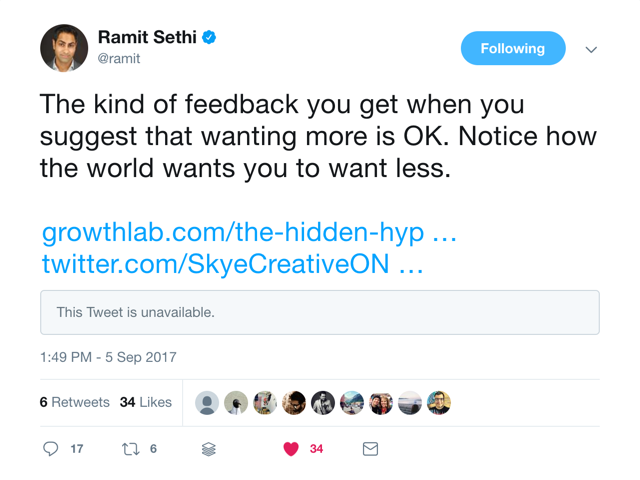 and one of the responses… 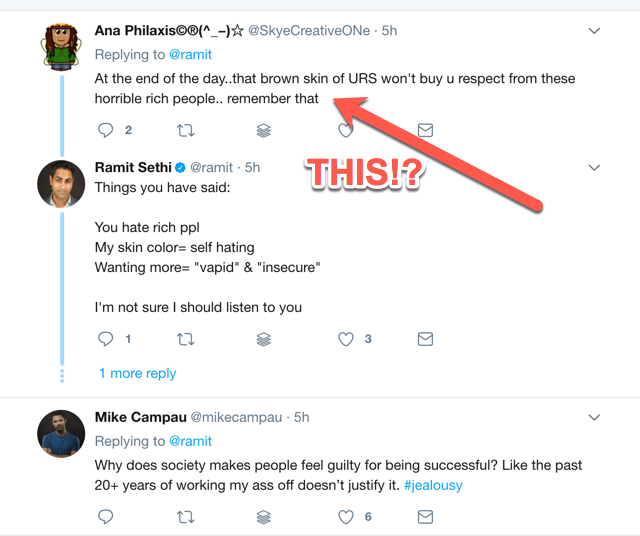 You might not need to be taught how to be rich, but someone may need to teach you to BELIEVE that you deserve more.

Now I thought I was the only brown person that didn’t have favor with the rich and famous, but it’s good to know that I’m not alone…

But seriously, I get that everyone has a different perception of success and how much money is enough, and how much is too much, but what does it hurt for a person to just believe a little more?

And i’m not necessarily talking about believing in the idea of being rich, wealthy, or famous, but I am talking about the possibility of believing that you deserve more.

The reality is this, from where you think and reason at this present moment is the only level of understanding you will ever have unless you are willing to think higher.

In other words, most people do not have the ability to comprehend anything higher than the thoughts they hold true at this very moment.

There are classes of people in this world based on socio-economic status. It’s engineered that way for a reason and there isn’t much we can do about it.

But to suggest that being a wealthy and successful person is morally reprehensible is a bit limited and quite frankly, it’s starting to get old.

There is someone out there that doesn’t necessarily want you to have less so they can have more, but they know the strategies to having more and they’re willing to embrace a thought process that agrees with that outcome.

And trust me, they are perfectly OK with pursuing their dream just as long as no one else deprives them of that pursuit.

And why not? This is a free country with opportunity open to anyone willing to work for the successes those opportunities bring.

Do we all frown at the likes of a Bernie Madoff? Of course we do.

Greed was the precursor there, but we aren’t talking about hundreds of millions of dollars. We’re talking about helping people not live paycheck to paycheck.

We’re talking about helping someone earn extra money in their pocket to take a vacation every once in a while.

Did you know the Social Security Administration released figures a few years ago that reported 51% of the U.S. population earns LESS than $30,000 per year?

In an economy where the cost of living is continuously going up, jobs are being phased out by technology, and the skills gap is widening at a feverish pace what does it help anyone to not have a desire to want more?

Hell, how about a desire to keep pace with the changing times?!

Let’s skip the being wealthy part of this entire discussion altogether!

Most people will not stand a chance in this economy unless they keep up and continue to grow and develop their skillset, so wanting “less” is not an option.

And to be honest, I don’t think wanting less is really the issue:

When I see comments like these, for me it’s either:

2. You don’t have much of a desire to accomplish much.

None of these are personal attacks, but I just couldn’t help but to comment to the likes of individuals that think it’s ok and self-serving to undercut and play themselves SHORT in a world that would rather keep their foot on your neck than to motivate you to be more, have more, and do more.

The wealthy stay wealthy because they don’t adopt the kinds of ideals that keep them financially poor.

This is definitely a have’s vs. the have-not’s conversation, just like it’s the Democrats vs. the Republicans.

They believe in limited regulation because they BELIEVE that in a FREE ENTERPRISE society they can BUILD the American Dream with their bare hands.

If you’ve ever listen to Gary Vaynerchuk, who is also an Entrepreneur and a 4-time best selling New York Times author, speak on this topic his message, time and time again is that, we live in one of the best times to ever start a business and create a life of our own no matter the age.

In this country it takes a lot to break the chains of socio-economic bondage, but in this country you also have more opportunity than you can even begin to realize.

This further reminds me of Jack Canfields book, “The Success Principles: How to Get from Where you Are to Where You Want to Be.”

In his book he speaks to the very first point of Ramit’s post about being specific about what you want.

Jack says instead of taking what life gives you, ASK SPECIFICALLY for what you want. So if you want the blue car with the leather interior and the upgraded audio system, that’s what you should be asking for.

Spiritually speaking, the Universe responds to what you demand of it.

If you are unclear on what you want and lack confidence in that desire, you will get just that.

In Ramit’s article “The hidden hypocrisy of wanting “more“, in the every first paragraph he asks…

“If you had a magic pill that would let you live the life of your dreams, what would your life look like?”

The next line after that says…

When I looked at the responses to Ramit’s tweet where he asks these questions in his blog post, you can tell instantly that some of those individuals didn’t really expect much of life or of themselves.

Again, it’s all about expectation.

But why did Ramit open his post with the two lines above?

Because he understands that most people do not truly know themselves nor are they clear on WHY they do what they do every morning they wake up.

So let’s not demonize those that have where we are lacking.

And I couldn’t agree with Ramit more in that, having money provides experiences that you can’t put a price tag on. The ability to take your children and your family on four vacations a year without breaking a sweat is priceless.

There are no cutting corners, being cheap, or saving a buck when it comes to the feeling and gratification that comes from spending quality time with the people you love.

You can’t quantify that.

It just doesn’t happen that way in life.

Also understand that any success that you have is never all about you. When you are successful there are so many people around you that stand to benefit, that stand to gain, and that stand to grow from what you give to the world.

The company that you work for right now is probably feeding the families of hundreds, if not hundreds of thousands of people. And someone started that company because they had a dream and a desire to want “more” out of life.

Give more and expect more of yourself.