The Challenges of Navigating Career Success for Black Women 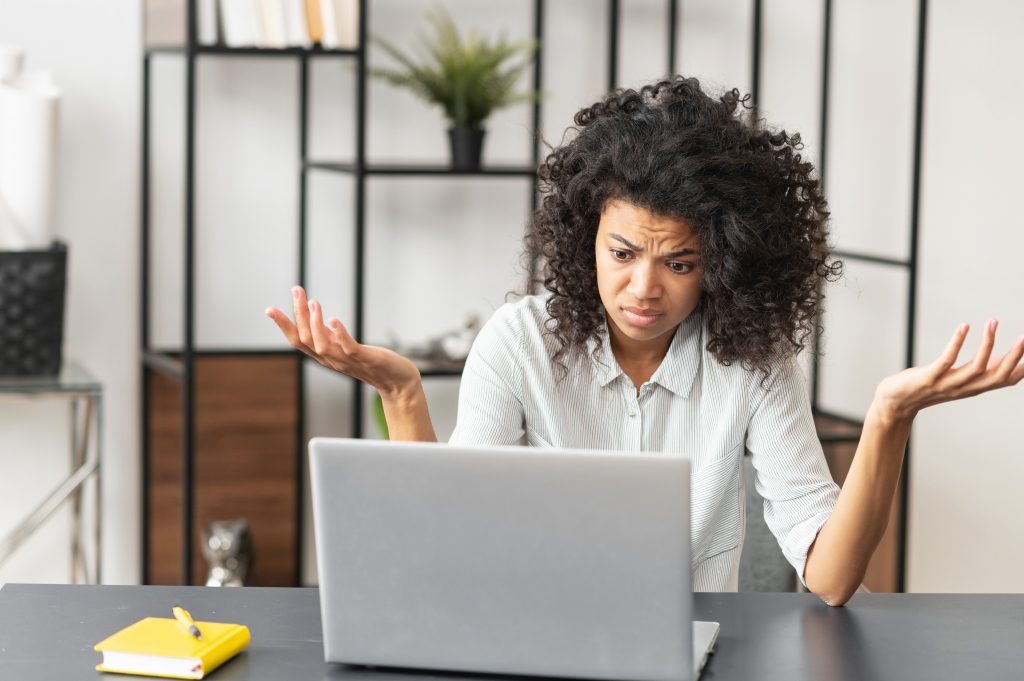 54% percent of Black women report being the only Black individual in the room at work. Likewise, they are the sole individuals who feel excluded, closely watched, and under pressure to perform. Most notably, many of these women feel like their performance reflects on the entire population of Black women.

These barriers, among hundreds of others, show what it’s truly like being a Black woman in corporate America. It’s more than a gender pay gap or an autonomic preference. There is an intrinsic bias in the corporate world that we must identify and eradicate.

To learn more about barriers for Black women in corporate America, keep reading. The data is eye-opening and – admittedly – saddening.

Black women report feeling pulled in two different directions at work. Their coworkers and managers are constantly watching their every move, but – at the same time – the individual feels powerless and unseen.

Balancing these two extremes is a hefty weight. In fact, workers may not know where they fall at any given time in the day. That’s why you may hear some Black women talk about how they never let their guard down at work.

Black women are forced to operate at 110% so that their coworkers hear them and see them. At the same time, they have to be careful not to come off as too loud or unfriendly in the process.

The ‘Black attitude’ refers to the belief that Black individuals – especially Black females – are inherently angry or sassy. Because of years of breeding this belief, individuals of all different races and ethnicities began to believe it. Even Black women began to believe it, forcing them to hide at the workplace in fear of retribution for speaking up about anything and everything.

In fact, more than half of Black employees have experienced racism at work, one of the most prominent forms including these microaggressions like assumption in behavior.

There is no such thing as the ‘Black attitude’ or the ‘sassy Black girl.’ When an individual is angry, you or someone else has likely done something to make them angry. Their race does not make them inherently angry.

Black women feel they have to bite their tongues when other individuals perpetuate these false stereotypes. Otherwise, they are only perpetuating the stereotype themselves.

Since standing out and drawing attention causes too much controversy, Black women tend to hide in the workplace. They opt for flat shoes, a ‘White’ hairstyle, neutral colors, and loose clothing. They do everything in their power to avoid looking like they’re trying to overpower anyone.

Many Black women make these choices without consciously realizing that they’re doing so. It’s been engrained into Black women’s brains for so long that it’s become the norm.

Flying under the radar is safe. No one sees you as a threat, and no one thinks that you’re trying to overpower anyone else.

Oppression after oppression from others has pushed Black women to oppress themselves for the sake of protecting others’ feelings.

It’s no surprise that years upon years of oppression have prevented Black women from reaching the top of career ladders. They’ve had to hide in order to socially survive.

Today, Black women make up 4% of C-level positions despite making up about 18% of the United States population. If you’re an individual who’d like to attribute this to a ‘lack of work ethic,’ review the statistics from Harvard Business School. Of the 532 Black women who have received their MBA from the Harvard Business School, only 13% have reached the highest-ranking executive positions.

This isn’t about a lack of education, a poor work ethic, or anything in between. It’s about Blackness and the belief that Black individuals – specifically Black women – should be an afterthought in corporate America.

The bottom line is that Black women are not only being socially isolated, but they are not being completely appreciated. Black women give 110% at work only to make less than others.

Black women carry the responsibility of keeping non-Black coworkers comfortable while limiting their own satisfaction in the process. This means that Black women are more likely to silence themselves before speaking up about an idea that they have.

Many Black women use less assertive forms of communication to share opinions, just in case speaking to someone in person would grant too much attention.

At the same time, non-Black coworkers exclude their Black coworkers from important meetings and impactful conversations. Sometimes, these individuals do so without thinking. It’s second-nature to talk over and ignore others in meetings.

Non-Black coworkers should be seeking Black opinions rather than relegating them to an after-thought or email. Everyone should be seen and heard in the workplace.

Socially Isolated and Criminally Called Out

This discovery sent out shockwaves. Data like this explains why Black women are afraid to speak out. Over and over again, Black girls and Black women pay a high social penalty for doing so.

New York City schools expelled these Black girls for being too vocal, assertive, and hostile. These young girls will now grow up thinking that they should stay quiet rather than speak their minds.

Repeated, unconscious microaggressions like the expulsion of these girls are what perpetuates the system.

Coworkers and managers should be seeking Black perspectives and providing a safe space for Black women to be open and vulnerable about their claims and grievances.

When in doubt, coworkers should be talking less and listening more. Black women need to know that they are safe to be authentic in the workplace. Black women have grown up with the idea that they need to remain strong and unaffected at all times in order to prevent themselves from stepping over other people.

Now is the time to give these women a voice.

By believing and perpetuating these stereotypes, many coworkers are only becoming part of the issue.

The impact of the Black Lives Matter movement has reached an all-time high. With protests finally receiving the coverage that they deserved in 2020, more change has happened than ever. However, the change doesn’t excuse the damage.

Black women are being seen and heard in more spaces than ever before. Coworkers are recognizing their opinions and appreciating their input. More importantly, coworkers are noticing their hard work.

As the United States works to heal from broken times, Black women continue to try to soar above it all. There is definitely more to come from Black women in corporate America.

In fact, just this year in 2021, Rosalind Brewer is going to become the only Black female CEO of a Fortune 500 company.

Going Beyond the Barriers for Black Women in Corporate America

Even with all of the barriers for Black women in corporate America, these women continue to defy the odds. More and more Black women are gaining prestigious positions and earning awards and honors.

If you’re looking for a place of inspiration to grow your personal and professional life, start here with me.

I know that Black women are capable of breaking barriers and reaching higher positions in the workplace because Black women have already shown that they have the work ethic to do so. It’s time for the rest of America to see it, too.

Why Did Noam Bardin Leave Google