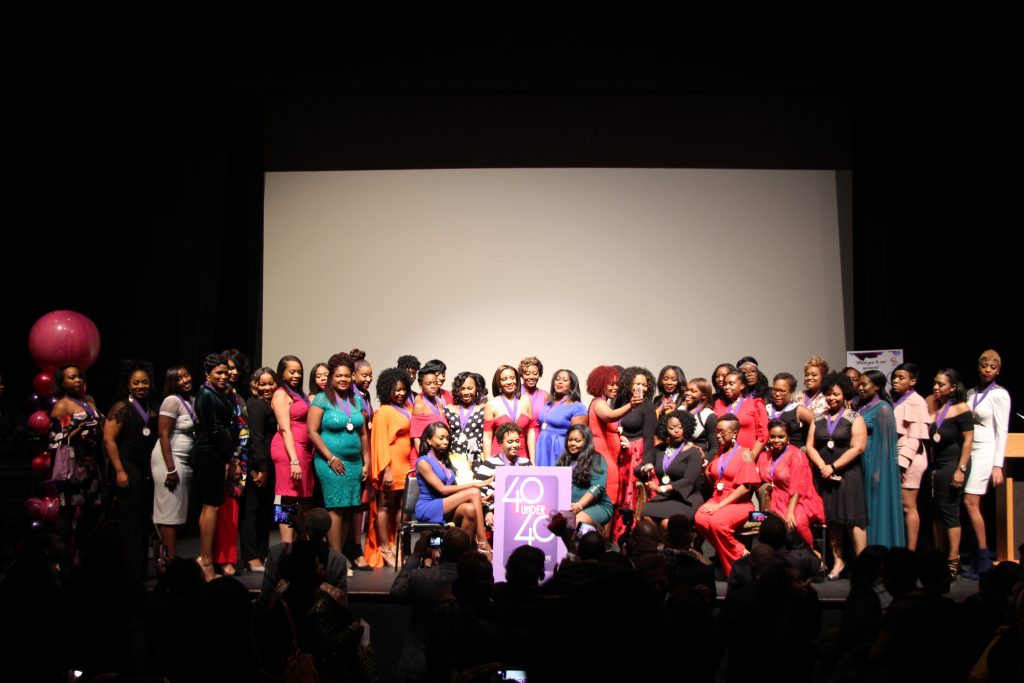 Inductees into the 40 under 40 Young Women’s Professional League (YWPL) celebrate the call to empower women through service, but what exactly is the 40 Under 40 and why should black women care?

If you know of another organization in the City of Chicago that is actively bringing together 4o powerful, and professional women for a purpose, I really would like to be pointed in that direction! Because I honestly don’t see it, but please feel free to correct me. Let’s talk about the YWPL 40 under 40.

All too often many are very quick to dismiss black women as being a group of women that value convening and assembling with one another for the purpose of lifting each other up–you can thank reality shows and the Housewives for that perception–but there is something special happening in Chicago with an organization of women where the goal isn’t just to hand out an award, but to showcase service. Enter the Young Women’s Professional League (YWPL) 40 under 40.

On Thursday, November 30th, now in it’s 3rd year, I had an opportunity to witness 40 amazingly beautiful, professional, and accomplished women of color be inducted into the Young Women Professional League at the Harold Washington Cultural Center in the Bronzeville neighborhood of Chicago.

Launched by a young woman where over two decades earlier she herself would find mentoring and direction through a similar organization in the Englewood neighborhood of Chicago–Demoiselle 2 Femme–as a young mom, Cheresa “Reese” LaFrances Purnell launched the inaugural group of the YWPL 40 Under 40 Young Women Professionals League in 2015 to recognize 40 black women that are rising stars in their field of work.

Additionally, Cheresa launched the YWPL 40 under 40 to bring together professional, seasoned entrepreneurs and career women to help continue the work of serving young women ages 18-24–where research shows these women are at a higher risk of dropping out of school, engaging in criminal activity, and becoming single moms.

She also want’s to spawn the next generation of women leaders. She recalls clearly a conversation she had with Demoiselle 2 Femme founder Sherida Morrison where it was expressed that there was a need for this…

“I just recall having a conversation with Sherida where she spoke about the lack of service among young women of color. Sherida is getting older and she is very concerned with passing the torch to someone that will continue to do the work that she started. When we spoke it was clear to me that she didn’t see that from many of the women of our generation, especially millennials. This single conversation was the incubator for the idea that you now see today which is the 40 under 40.”

So when you think about the driving force behind why this organization was created, it’s clear to see that there is a lack of service, by-and-large, across every area of the black community. The women of the 40 under 40 serve a very viable purpose in helping to turn the tide of a lack of self-love and empowerment among women. This call-to-action for these 40 women require them to do more than just show up to an awards gala to receive an award.

There are also high expectations of the women that agree to be inducted into the league, such as participation in organization events and actively mentoring young girls.

The selection process to be part of the 40 under 40 requires that women go through a nomination process by their peers. These women, for all intents and purposes, are the gold standard in proffering a new legacy for women of color that is based on service, and less on accomplishments and accolades. The selection process is a year round event that culminates in the selection of 40 women by the month of September

“We have women buying $700 shoes but won’t give $10 to an organization on #givingTuesday” -Cheresa LaFrances Purnell, Founder and President, 40 Under 40 Young Women Professionals League (YWPL)

To date this marks 120 professional women of color that have made a decision to join the YWPL with a commitment to continue to carry the torch of servitude that was pioneered by the founder of Demoiselle 2 Femme and an early mentor to Cheresa, Sherida Morrison.

There are several “40 under 40” organizations and award ceremonies in the city of Chicago, most notably Crain’s 40 under 40 which highlights the best and the brightest business executives, government leaders, and leaders in philanthropy. But for those that think that this organization is a farce or a spin-off of Crain’s “40 under 40” or any other more notable recognition event, think again.

So, given that we can speak all day about the inequities that we have within the black community, here are 3 reasons why you should care about what the 40 under 40 are doing: